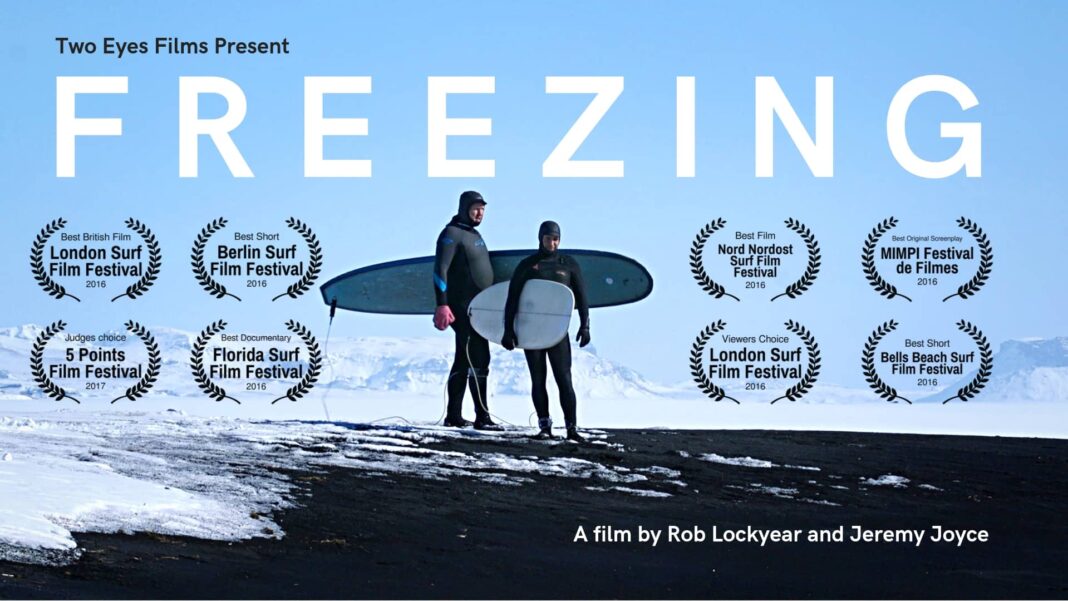 Directed by British filmmakers Rob Lockyear and Jeremy Joyce. Watch the film here and read our article about it from our latest issue of NSM.

Article from our latest issue of NSM available here (nr.23)

Whenever a film comes out that describes itself as “a cold water surf trip”, there’s a good chance we’re in for a hard time. It often features corny stereotypes about surfers on a mission, driven by a mystic force within them. About men versus an unforgiving, yet fair wilderness – which they overcome, at least for a few good waves. Did you ever realize how rarely a surf movie features the oh’ so realistic possibility of not scoring good waves on a trip? That’s for a good reason, you say? Because a surf movie without pumping surf is useless, you think?

Well, you shoulda watch Freezing, a masterpiece by british directors Jeremy Joyce and Rob Lockyear. Freezing features the story of Jamie and Jeremy, who want to go to Iceland to search a mysto wave that Jeremy spotted on one of his dead grandfathers photos. They stumble through the snowy country, camp in hailstorms, write poems, grow their beards, get chased by giants and fearlessly dive into some heavy shorebreak – just to get pounded.

While the story itself is just a mock-up of about any travel film, it’s the brilliant dialogue and timing, that makes Freezing so special. The honours for the screenplay go to the directors Jeremy (who also plays one of the characters) and Rob – but even this brilliant script would be nothing without the acting of Jamie Baughn, a professional actor and childhood friend of Jeremy. His wit, facial expressions and Obelix-esque statue and character are the main sensation of the film.

So what can the whole genre learn from this Indie-production, that won the audience award at surf film festival London and sparked never seen before levels of excitement at Nouvagues Surf Movie Night Tour through in 15 cities? A good part of the surf scene is fed up with redundend stereo types, sold to them as reality. Be it in surf media, in webcasts or in films.

Intelligence pays off, mostly. Yes, even in surf movies.