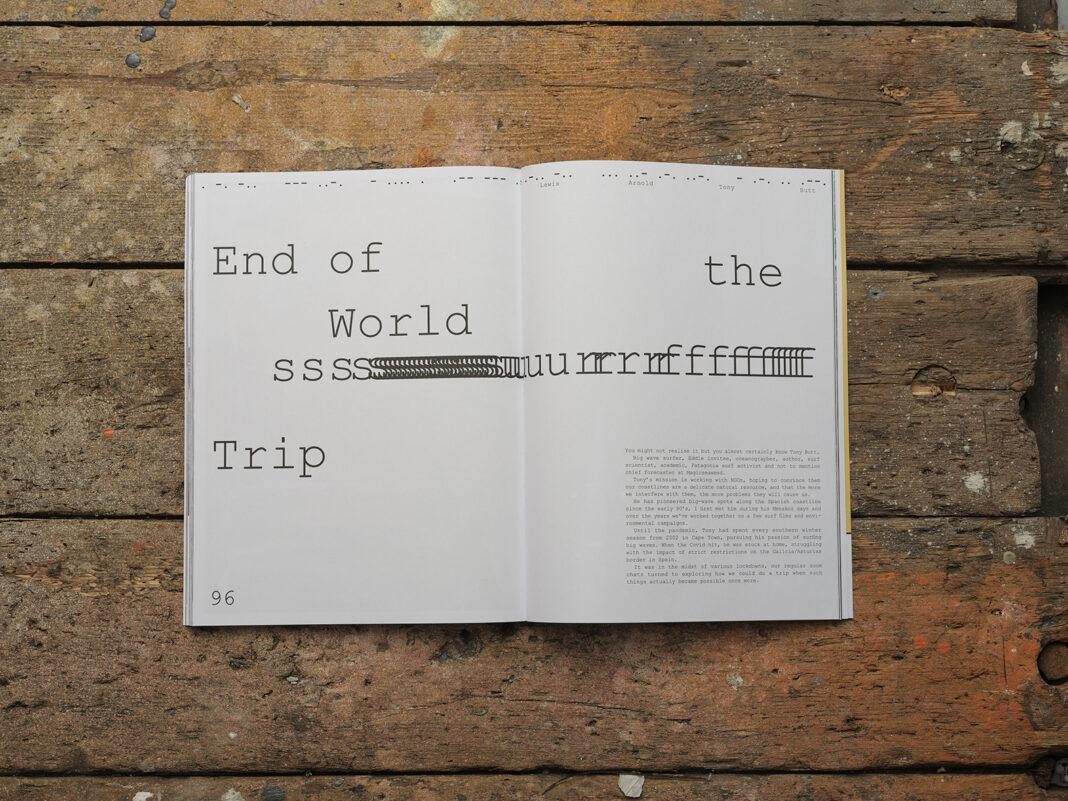 From our latest issue of Nordic Surfers Magazine nr. 33

You might not realise it but you almost certainly know Tony Butt.
Big wave surfer, Eddie invitee, oceanographer, author, surf scientist, academic, Patagonia surf activist and not to mention chief forecaster at Magicseaweed.

Tony’s mission is working with NGOs, hoping to convince them our coastlines are a delicate natural resource, and that the more we interfere with them, the more problems they will cause us.

He has pioneered big-wave spots along the Spanish coastline since the early 90’s, I first met him during his Menakoz days and over the years we’ve worked together on a few surf films and environmental campaigns.

Until the pandemic, Tony had spent every southern winter season from 2002 in Cape Town, pursuing his passion of surfing big waves. When the Covid hit, he was stuck at home, struggling with the impact of strict restrictions on the Galicia/Asturias border in Spain.

It was in the midst of various lockdowns, our regular zoom chats turned to exploring how we could do a trip when such things actually became possible once more.

Covid-19 has forced re-evaluation in many walks of like and surfing was no different. We pondered the whole concept of travelling to surf, the concept of the ‘surf trip” synonymous with the endeavour of surfing.

Travelling, particularly flying, is one of the most environmentally-destructive things that we do. And for surfers, a social group who often purport to hold the environment dear, surf travel is at best questionable. Typically, Tony’s take on the situation is pretty blunt.

Surfers need to urgently change the way we travel if we are going to continue travelling at all. This is in our own interest, because the environmental crisis will affect us more directly than most other social groups.

We would surf Basque Country, the French heartlands, Brittany, Cornwall, Wales, Ireland, the North Sea en route to the our destination in Caithness. All we needed was a lot of time, a lot of money and an expensive electric car.

In 2018, I had worked on Solstice 58.58° a short film exploring sustainable approaches in surfing like wooden boards, electric cars and just taking your time.

We discussed how we could take this idea further and show that surf travel can still be done without directly using any fossil fuels. We wanted to prove that travelling in an environmentally-friendly way can be as fulfilling and easy as the carbon-hungry travel that most surfers do nowadays.

As we thought about how we could make this happen, it began to dawn on us that maybe we were missing the point.

How many surfers have followed the European odyssey in the past? How many VW campers have burned endless diesel on the pilgrimage to Morocco? Sure we could make the journey in an electric car, but where does the electricity come from to power the car? The raw materials and resources to make the car? How ‘green’ is the battery? What fuels the ferry we would need to cross the Channel? If we need to detour to charge up, do those extra miles negate the environmental benefit of the electric car?

Like most things in life, a surf trip without burning any fossil fuels is not as straightforward as it may first seem.

We reconsidered what we really wanted to test and began to change tack.