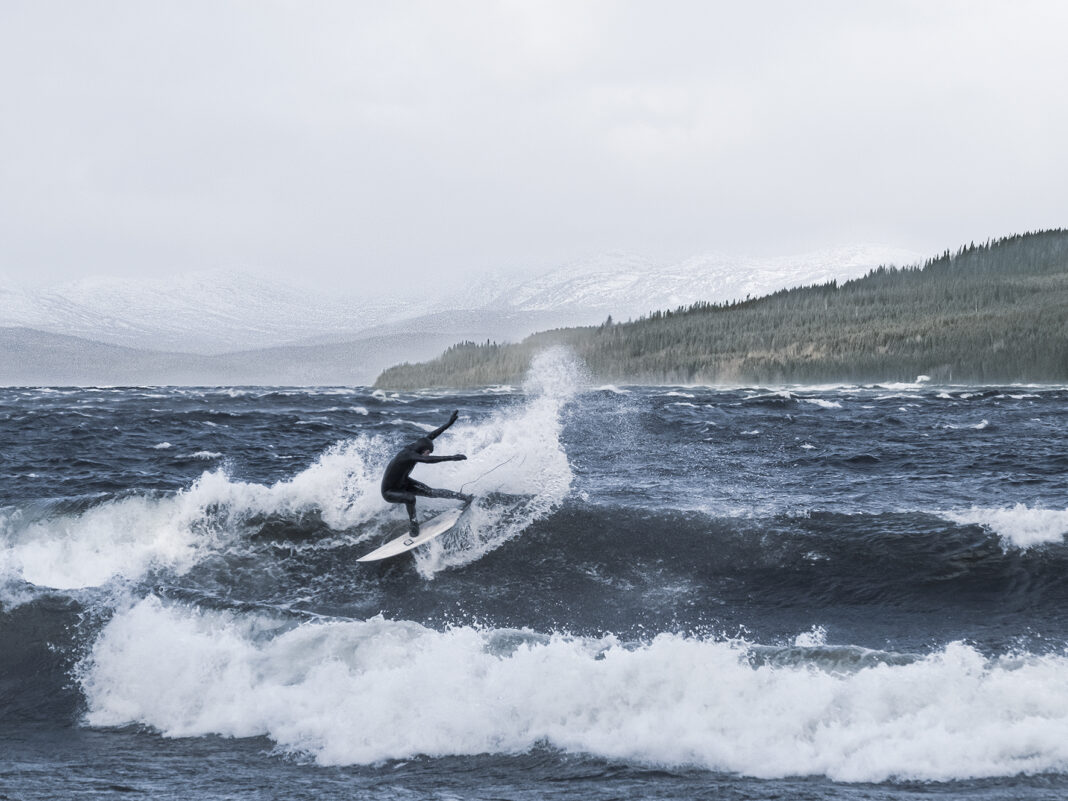 Watch Tim Latte get mindblown surfing a Swedish lake together with the local crew.

A few years ago, photos of well known Swedish skiers riding waves in a lake somewhere in northern Sweden appeared on my screen. These photos caught my attention for a split second but faded just as quick. Only until recently, when my DM’s got slightly bombarded with images from ski and lake surfing pioneer David Kantermo, things really got interesting.

The photos David sent me weren’t the average-sized ankle slappers I’d previously seen. These were images of shoulder to head high peeling lefts. I instantly replied that I was keen to come up next time, and politely asked if David could give me a ’heads-up’.

Fast forward a few weeks; I sure did get the ‘heads up’ from David, with him saying that a storm was about to come through and the forecast looked promising, even hyping it up to be the best forecast they had seen since their debut surf in the lake five years earlier.

I packed my gas station rental with various boards to be sure that I didn’t arrive under-equipped and headed seven hours North to spend the night in a small rental car by the lake. The very next morning, I woke up to David knocking on my window greeting me with, ”Welcome to Jämtland, Latte”, probably the weirdest phrase I’ve ever heard and probably ever will hear in the context of a surf mission. I never thought I would be standing in a 6/5/4 wetsuit with a board under my arm nowhere near the ocean, let alone surfing a landlocked lake up amongst the Swedish mountains.

After a quick hello to the local crew, I looked out over the lake, and couldn’t entirely believe what was in front of me. Shoulder high waves in a lake so small that one with relatively poor eyesight could look across. At that moment, many questions went through my mind, so I thought that I would take the opportunity to ask David Kantermo a few quick ones and get some clarification to this surreal phenomenon.

First off, thanks for the invite David! It sure was a blast and well worth the 14h drive! However, there are so many questions left to be answered here. This lake surfing thing is pretty unique itself, but how the hell did you guys get started? Let alone find this wave?
It’s a well-deserved question. Me and Henrik Winstedt heard that local legend, Stefan Engström, surfed Storsjön (another lake) in the 80s. We discussed it, looked at maps, and decided it was impossible. But during a hurricane five years ago, we decided this would be a great moment to prove it wrong. And boy, were we surprised. Shoulder high peelers in a little hidden bay at our first hit! After that experience, we started looking even more at the local maps and understood Kallsjön could also be a good option.

How often does it break? How many days a year can you surf it you think? Can you surf it year-round or does it freeze to solid ice in winter?
We surf the lake about 10 – 20 days throughout an average year. The best year so far, we surfed in Kallsjön / Storsjön / Trondheimsfjorden two times a week, the worst year about two times a month from Aug to Jan, which are the best months. All of these are lakes where the swells are built by wind and no groundswell. Kallsjön, where you surfed, got a 16 km fetch, Storsjön about the same, but Trondhemsfjorden got a longer fetch and also saltwater, which makes you float a bit better, so Trondheimfjorden is the pond with the most significant potential in our area. The ice never settles before new year’s at Kallsjön, and last year, we even surfed in Feb.

Have you found more spots in the same lake on other wind directions or other nearby lakes?
We did find both rights and lefts. The best spot is on the south shore and works on North north-west winds. But that’s our lake unicorn; we have not surfed it yet since. Storms with that wind direction are super rare.

Is it true that you and the crew have your own homemade surf report app?
It’s true. Mastermind and the only one selling boards and wax locally, at Inlandet (Store), Ola Nygårds, made an app that works very well. Make sure you get it if you buy wax at the store. The day you visited, we had a five-star rating on the app for 5 hours straight, and the colour peaked out at purple; we only have seen it fluorescent pink before that.

How crowded is it these days? As I saw around ten plus people out there with more jumping in when I left for home again. There seems to be a lot of passionate surfers living in Åre.
It sure is, but we don’t mind. Everyone is welcome, and to be honest, a crowd never really been a problem here. During one new years eve, we were 19 people in the water. A nice lady came by with cinnamon rolls and coffee when we got up. Fallen trees on the road, bad weather and snowdrifts stopped some cars from even getting there.

Skier Jesper Tjäder told me he caught one of his best waves ever, which is kind of surreal when you think about it, as it’s such a small lake. How big is the lake in regards to distance and depth?
The fetch is about 16 kilometres at best, and the lake itself is ranked as the 11th deepest lake in Sweden with its 134 meters.

We all saw that the lake is capable of producing some sizable waves! So here’s my last question: does it ever get as clean as it can get in the ocean? Have you ever seen it and is there proof of it?
We did get it very clean. The storms here often come and go abrupt, and after the winds settled, you can have glassy waves for about 15 minutes before it gets flat again. But I can’t show you pictures of it when those conditions are present; we are busy sliding on them. And you are very much welcomed to join in next time.

Well, thanks for your time David! This is quite astonishing in regards to how small the lake actually is, and it sure opens many new doors for us all to hunt waves in lakes all over Sweden, not just the Baltic. Pretty sure that Kallsjön takes the novelty wave prize in 2020 if there was one.